2 Jun 2016 | Email | Print |  PDF
The Agility Africa 2016 Photo Competition has been launched in an effort to inspire and showcase images that illustrate the breathtaking pace of change across modern Africa.
The annual contest, now in its second year, is the first pan-Africa photography competition to focus on Africa’s rapid modernisation. It is open to professional and amateur photographers alike.

The competition seeks to highlight the progress and development on a continent of contrasts, documenting an Africa booming with youthful consumers, new technology, urbanising populations and promising economic prospects.

“Africa’s modern spirit and rapid evolution are obvious to those of us doing business there every day,” says Geoffrey White, CEO of Agility Africa. “It’s important for the rest of the world to recognise the drive, ambition and creativity powering development across the continent. The Africa 2016 Photo Competition is one way we can bring attention to it.”

The competition will take place from 1 June - 1 September 2016. Agility will award a US$2,000 cash prize to the winner of each of three categories: cities, industry and technology. A further US$2,000 grand cash prize will go to the photographer who shoots the overall winning image, deemed to best illustrate development and growth across Africa; giving photographers a chance to win up to $4,000.

...Africa’s modern spirit and rapid evolution are obvious to those of us doing business there every day...

The winning photographs will be shown on a CNBC Africa telecast and published in Forbes Africa and be featured in Agility social media, promotions and advertising.

The competition will be judged by an independent panel consisting of Sneha Shah, managing director, Thomson Reuters Africa; Bronwyn Nielsen, executive director of the Africa Business News Group and editor-in-chief of CNBC Africa; and Salim Amin, photographer, filmmaker and chairman of Africa 24 Media and Camerapix.

The Africa 2015 Photo Competition drew 700 entries submitted by photographers in 33 countries. Winning entries were dramatic images that captured the capital city of Luanda, Angola; wheat fields in Kenya; and a child holding a smart phone in Uganda.

“Across our Africa business, we’re seeing the impact infrastructure improvements and technology are making in African life,” White says. “The contest is an engaging way for us to try to reflect the modernisation we see, from sustainable farming to manufacturing to energy production. Our hope is that perceptions of Africa will become more balanced, and people elsewhere will come to see Africa as an increasingly significant contributor to the world economy.”

Agility is investing in Africa and is committed to building new logistics capacity and infrastructure to support the development of global and SME businesses across the continent. The company’s strategy also includes a strong social and environmental program, focused on education, training and health.
NextOptions
›
Email Print PDF 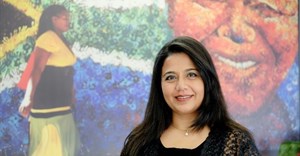 Smart leaders use strategy to seek out opportunities20 Jun 2017 How to support ‘economic patriotism' to grow Africa's economies15 Jun 2017