How to deal with the troll armies

By: Louise Marsland
Journalists and media organisations worldwide are facing increasing attack from troll armies online which actively seek to discredit journalists and the media they work for in campaigns against press freedom or for nefarious agendas. 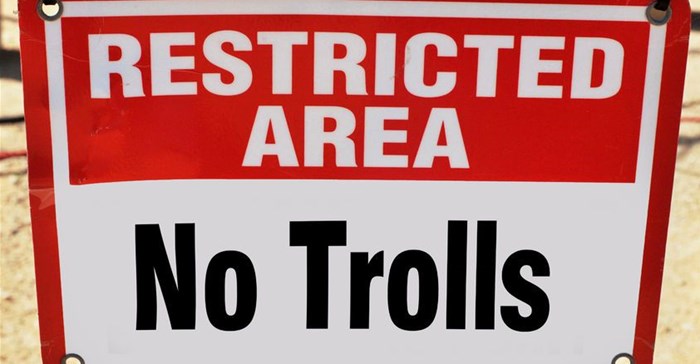 Reporters Without Borders has recommended that media organisations and journalists around the world strengthen training in digital security in the face of increasing cyberviolence.

In a report entitled, Online Harassment of Journalists: Attack of the trolls, Reporters Without Borders evaluated online harassment of the media globally, as a disinformation strategy and how “troll armies” and “troll gangs” operate online in various countries to seize control of the news agenda, attack journalists online, fuel fake news, censor independent media voices, including how governments and terror organisations manipulate the news.

The danger to journalists is real, not just their reputations or personal information, but also their lives are being threatened online. These “threats and insults on social networks are designed to intimidate them into silence”. RSF reported that these online mercenaries are using bots and freedom of expression to curtail the freedom to inform.

“Online harassment is a phenomenon that is spreading throughout the world and now constitutes one of the gravest threats to press freedom,” RSF secretary-general Christophe Deloire said. “We have discovered that information wars are not just waged between countries at the international level.

“Journalism’s predators also deploy troll armies to hunt down and harass all those who investigate and report the facts honestly. These despots let their mercenaries train their guns on journalists on the virtual terrain as others do in actual war zones.”

Journalism’s predators also deploy troll armies to hunt down and harass all those who investigate and report the facts honestly.

In the report, released this week, RSF has documented numerous cases in 32 countries for the last six months, classifying the types of online harassment that journalists are facing.

“The links between the masterminds and the trolls who carry out the cyberviolence against journalists are often hard to demonstrate. More research needs to be done. One thing is nonetheless clear: this phenomenon is spreading throughout the world.

“How should we respond to these virulent online campaigns that often have dramatic consequences?"  asked RSF, which makes 25 recommendations to governments, international organisations, online platforms, media companies, and advertisers.

In Sub-Saharan Africa, persecution of journalists has moved online in many Africa countries, said RSF, and online harassment has become a new way for Governments, in particular, to censor journalists, increasing the impact on press freedom with this insidious way of targeting journalists using trolls and fake accounts. It is all the more dangerous, reported RSF, because the widespread nature of this new threat is rarely acknowledged.

“In many African countries, press freedom predators have begun fuelling the online harassment of journalists on social networks. In Uganda, a monitoring team focused on social networks was established by the media regulation agency in order to silence criticism.

In Ethiopia, leaked documents revealed that officials had hired commenters to support the regime on social networks. Sonia Rolley, the former RFI correspondent in Kigali who was expelled in June 2006, was harassed for months on Twitter while she was in Rwanda in 2014.

“It was eventually revealed that the account from which she was being harassed was held by a person who had access to the account of Rwandan President Paul Kagame. In the wake of the controversy, numerous journalists were blocked from Kagame’s official Twitter account.”

In Egypt, while blocking many independent media organisations and human rights defence groups online, Egyptian authorities have also attacked journalists, including foreigners, online, which unleashes the trolls too.

“Egyptian activist Waël Abbas, named by the BBC as one of the most influential people in the Middle East, was hit by the same tactic. He was arrested in May 2018. At that time, he had not been able to open another account on the site. In effect, he had been deprived for life of his digital identity,” RSF reported.

RSF has drafted 25 recommendations in the report on how Governments, civil society and the media should deal with the troll armies and this online onslaught on press freedom. These are the recommendations, as drawn from the RSF report, quoted verbatim:

1. Strengthen laws authorising prosecution for online harassment of journalists. Enforce these laws strictly. Governments must systematically investigate online harassment cases and prosecute and convict their perpetrators. Law enforcement agencies must be granted the human and financial resources necessary to accomplish these goals.
2. Strengthen the responsibility of online platforms in regard to content shared on their networks. Online platforms must not be given the power to control or censor this content. The system of platform responsibility must be linked to the effects of their activities on the quality of public debate. Governments must likewise strengthen requirements on platforms, especially concerning the transparency of their curation algorithms, as well as the extent to which their moderation policies are consistent with freedom of expression and freedom of information.
3. Implement systems for alert and rapid intervention in harassment cases. These mechanisms must be coordinated with prosecutorial authorities.
4. Guarantee that the rules for fighting hateful content are applied fairly and consistently. The rules must not lead to abusive limits on freedom of online freedom of expression and information. Specifically, governments must implement procedures to shield against misuse of these rules and alert mechanisms to censor and silence journalists.
5. Implement recovery procedures for cyber-harassment victims. These could include financial restitution, medical and psychological aid, and relocation assistance.
6. Prohibit resorting to online influence and destabilisation agents – trolls – in order to manipulate public opinion and harass journalists.

7. At the United Nations, governments must urge creation of a Special Representative for the Safety of Journalists. This office would enforce governments’ respect for their obligations.
8. European governments must sign and ratify the Additional Protocol to the Council of Europe’s Convention on Cybercriminality. State members of the African Union must likewise ratify the Convention on Cybersecurity and Personal Data Protection. State members of other regional multilateral organisations (Organization of American States, Association of Southeast Asian Nations, African Unions) must work to create similar conventions.
9. Governments must encourage multidisciplinary international research on censorship techniques. These practices change constantly. Research must focus on operating methods and on responses to cyberharassment in general and on cyberharassment of journalists in particular.

10. Governments must strengthen digital education. The aim is to increase internet users’ awareness of the impact of online harassment, and the legal consequences for perpetrators.
11. All public policies concerning online violence must take into account its gender-specific nature. Women journalists are the major targets.

12. Continue to urge governments to uphold the principle that “the same rights that people have offline must also be protected online, in particular freedom of expression”.
13. Contribute to research on methods of online harassment. Organisations must help finance this research and make recommendations to governments on fighting cyberharassment.
14. International and regional human rights protective systems must include online harassment in their monitoring of abuses against journalists.

15. Online platforms must be transparent concerning their rules for moderating online content.
16. They must strengthen the public nature and the transparency of their actions against online harassment. And they must establish alert systems focused on hate content. They must ensure that these rules are not turned into methods to silence journalists. All alerts concerning potentially illicit content must be subject to careful analysis. The platforms must be able to distinguish abusive alerts, designed solely to muffle upsetting opinions, from alerts over genuinely abusive content.
17. Establish a victim-centred emergency alert system for journalists who are targeted by online threats and attacks.
18. Cooperative actively with law enforcement authorities in investigations of cyberviolence against journalists, with measures including public release of the perpetrators’ names.
19. Combat online harassment campaigns that are orchestrated by troll factories or bots.
20. Develop communication and awareness campaigns concerning online violence, with special attention to the targeting of journalists, especially women.

21. Acknowledge the threat and learn to anticipate attacks. The media must strengthen the awareness of owners, executives and journalists, and implement emergency internal mechanisms such as cyberharassment hotlines to assure support and protection of journalists hit by harassment.
22. Encourage the creation of networks to exchange best practices by developing a holistic approach. Those involved should include editors, community managers, digital security and legal executives as well as journalists within a media organisation, but also from other media organizations, including those from abroad and even from other industries.
23. Make online harassment of journalists a major issue. Devote more reporting and investigating to a topic that is not well known, thereby informing and building awareness in the public at large, and among government officials and journalists themselves.

24. Refuse to advertise on sites that participate in dissemination of hate content. And shun sites that do not do enough to fight cyberviolence. Develop ethics codes and best practices for online advertising.
25. This work should be done in cooperation with civil society organizations, in order to ensure that online advertising does not help finance online harassment.

Social media: an opportunity for governments to engage their citizens3 Dec 2021 False story about decuplets was a low point for journalism: how to fix the damage5 Jul 2021
More related