Keeping up with climate change: Climate zoning as a tool to fight hunger

6 Feb 2018 | Email | Print |  PDF
By: Ariong Moses
In countries around the world, farming households are facing the wrath of unpredictable climate patterns. This has not only resulted in hunger-related deaths, but also in an increase in the number of persons living below the poverty line in many developing countries, especially in Africa where vulnerability is high. Bjvisser via Wikimedia Commons - Ethiopian farmer at work on his land.

The year 2017 saw over 30 million people facing starvation in East Africa, South Sudan, Yemen and northeastern Nigeria alone, according to reports by Oxfam International. Although these regions have experienced drought conditions in the last three to five years, the intensity and frequency of drought have increased - along with high food loses and hunger. This has threatened the livelihoods of 80% of households in these regions that directly depend on subsistence farming.

Some World Bank studies in Uganda show that 10 million people slipped below the poverty line in the last five years. This situation may reverse efforts by development groups to help vulnerable populations out of poverty, especially if nothing is urgently done to reduce the effects of climate change.

As a social worker in Uganda working to improve food security and incomes among smallholder farmers, I often get the opportunity to interact with farmers and feel their frustration as their crops go to waste. My most recent visit to Magoro village, in the Katakwi District of northeastern Uganda, brought tears to my eyes. There, I met an elderly man called Okello who was emaciated, with bare bones and countable ribs visible through the tattered clothes he wore. He had tied his stomach with a piece of cloth so as not to feel hunger. “Tying my stomach keeps my intestines together and helps me not to feel hunger”, he said.

This part of Uganda, which was once the leading producer of beef and dairy products in the country, has lost its relevance in the livestock industry and now experiences hunger episodes every year due to frequent crop failures.

Updating agricultural zones in the face of climate change

Although the Government of Uganda and numerous development partners have invested millions of shillings to boost agriculture production across the country, Okello and many others still stare at death in the face. Reports, like that published by DFID in 2008, reveal that Uganda’s temperatures will rise by 1.4°C on average by 2020 and as high as 4.3°C by the 2080s. They serve as a call to action that we must respond to.

This should start with the mapping of climate and livelihood zones so that targeted advisories and interventions can be implemented. Uganda has 38 livelihood zones mapped by looking at the uniqueness of the soils, rainfall patterns and farmer cropping patterns and behaviours. However, the agro-ecological zones as we know them today are being re-shaped by increasingly frequent extreme climate events, such as flooding and prolonged drought.

A better understanding of the new zones created by climate change would have prepared farmers to adequately cope with the prolonged dry spells - or its opposite, flooding and waterlogging - which have occurred since 2007. Updating agricultural zones in the face of climate change will ensure that resources are channelled towards promoting relevant enterprises that are suited to the soils and rainfall patterns for specific regions.

How science and technology can be leveraged to boost farmer experiences

Climate adaptation programming has worked very well in countries like Brazil, where a combination of insurance subsidies and agro-climate zones (ZARC) are being used. With well-mapped soil types and rain patterns, farmers are given advisories, at the county level, on when to plant which crops and which seed types will thrive in different soils. Predictive models that give 80% accuracy have shown how science and technology can be leveraged to boost farmer experiences in agriculture, leading to food sufficiency and higher incomes.

This is something Ethiopia is aggressively pursuing, starting with accurately mapping climate zones and understanding of climate trends in the different woredas (district administrative units). With the Agriculture Growth Programme (AGP) targeting youth and women, Ethiopia is boosting production by working with farmer cooperatives and involving the private sector in agro-processing and marketing. This has led to tremendous increases in production, with wheat yields in Sinana woreda tripling from 1.8 to 5.0 tonnes per hectare in just three years, between 2011 and 2013.

Although the country experienced severe drought in the last cropping season that led to low harvests, one can appreciate the progress they are making towards achieving food and income sufficiency among farming households through this type of planning.

Countries around the world grappling with the effects of climate change need to look to some of the steps that Brazil and Ethiopia have taken as they work to support farmers facing climate change with better policies. Embracing agriculture research and the use of improved technologies for soil and rainfall mapping and modelling will be the key to providing targeted advisories to farmers. This will require training of scientists and acquisition of modern technologies that can accurately predict the fast-changing climate patterns, as well as adopting tested systems of knowledge and technology transfer to the farmers.

Norman Borlaug, the American scientist who led the green revolution around the world, once said that you can’t build a peaceful world on empty stomachs and human misery. Climate change is, therefore, a direct threat to peace as it threatens to increase poverty across the world.

AllAfrica is a voice of, by and about Africa - aggregating, producing and distributing 2000 news and information items daily from over 130 African news organisations and our own reporters to an African and global public. We operate from Cape Town, Dakar, Lagos, Monrovia, Nairobi and Washington DC.

Ariong Moses is an Agriculture and Environment Specialist. He is an Aspen New Voices fellow 2017. He tweets @ariongm. 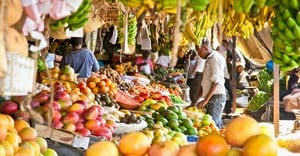