R2K has issued a statement reflecting on happenings over the past year (and current ones) affecting the media in South Africa and Africa as a whole, on World Press Freedom Day...

Committee to Protect Journalists is concerned with developments in the trial against Angolan journalists... 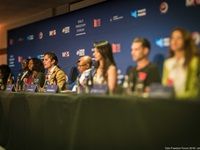 The Human Rights Foundation (HRF) and the Nelson Mandela Foundation recently brought the Oslo Freedom Forum (OFF) to Johannesburg, South Africa to mark the 100th anniversary of the former president's birth.

Oslo Freedom Forum to be hosted in Joburg this MarchArticle

The Human Rights Foundation (HRF), in partnership with the Nelson Mandela Foundation, will be hosting the first-ever Oslo Freedom Forum in Johannesburg (OFFinJoburg)...

Africa Day statement from Right2Know calls for freedom of expression in Africa...

Reporters Without Borders has joined nine other NGOs in demanding the withdrawal of criminal defamation charges against Angolan journalist Rafael Marques de Morais, who went on trial on 24 March...

Criminal libel has no place in law booksArticle

He has made it his mission 'to expose, through my investigations, the scourge of corruption, which is robbing (Angola) of billions of dollars a year': journalist and human rights activist Rafael Marques de Morais...

At 'Power Reporting', African journalists can develop their skills from the expert knowledge of 40 speakers, across 60 sessions, be it on tracing money, mapping or data visualisation, telling better stories or learning more about media law...

NEWSWATCH: There's good and bad news out of Angola: Mail & Guardian reports that an Angolan journalist has won a top award recognising his fight against graft and human rights abuses, and speaking of the latter... a 17-year-old has been imprisoned for allegedly insulting the country's president.

African and international press freedom groups, civil society organisation and concerned journalists have signed a letter addressed to the UNESCO Executive Board calling for abolishment of the UNESCO Obiang Nguema Mbasogo International Prize for Research in the Life Sciences.

The CNN Press Office (London) has answered the concerns raised by Maka Angola on the agreements between the international news network and the Angolan regime, regarding a media campaign to promote a better image of the latter, due to grave concerns of nepotism and corruption.

Next >
System.Web.UI.Html32TextWriter
Let's do Biz